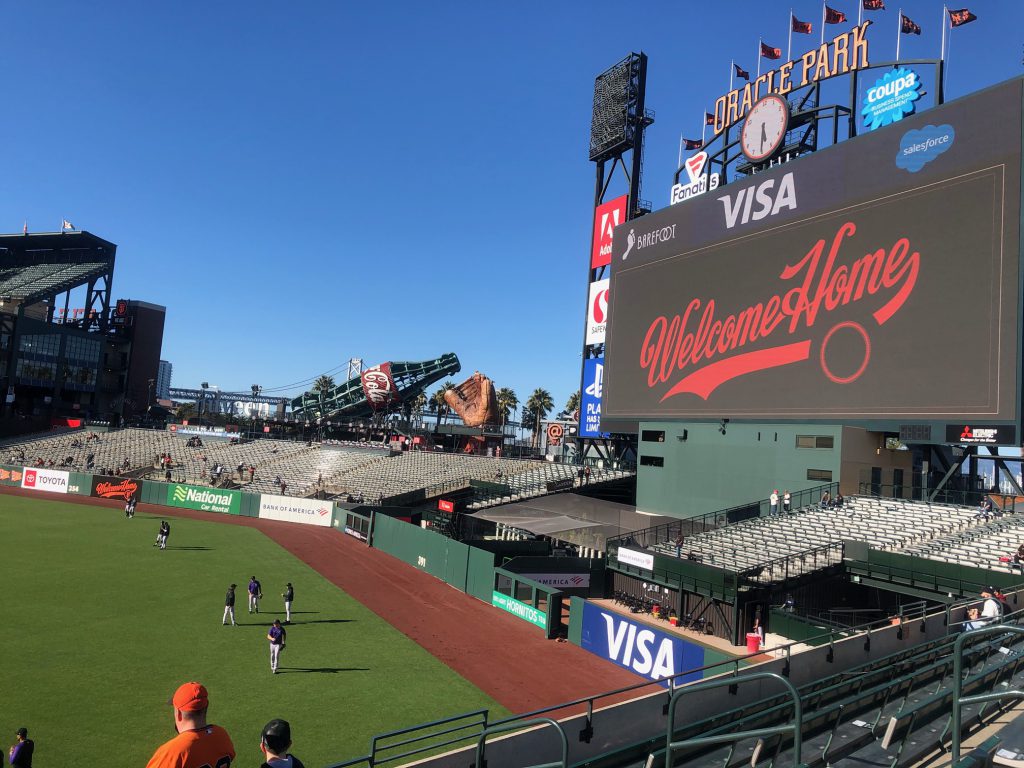 * Don’t forget to keep refreshing the page so you can enjoy this live report. 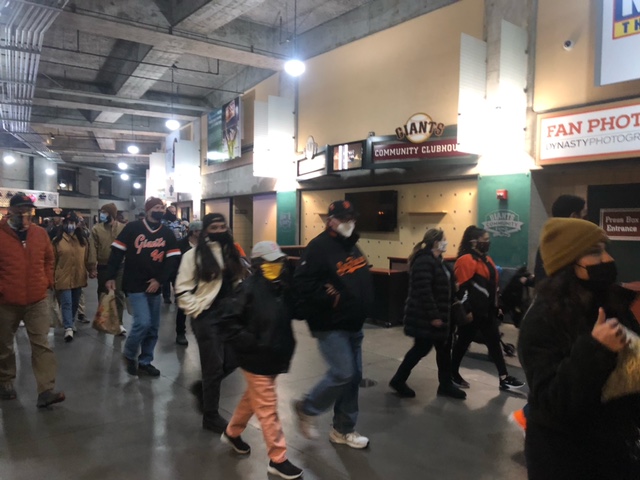 * Don’t forget to keep refreshing the page so you can enjoy this live report.

Garret Thompson pops up to RF. One out. Alex Wood in the mound.

Wood looking dominant on the mound.  9 picthes in the inning so far but looking dominant. Story hits a grounder to third base. Longoria makes an easy play and the side is retired. Rockies 0 Giants 0

La Stella starts the inning with a ground to firs. Easy out.

Charlie Blackmon hits a pop to Center Field. Tauchman get undr it and catches it. One out.

Daza is up next.

The crowd at Oracle Park slowly starts to chant in support of the SF Giants. It is a strange sensation.

Daza strikes out. The side is retired. The crowd goes crazy.

Alex Dickerson hits a line drive single to Left Field. Crawford is up next…

Ruf walks. Men on 1st and 2nd with 1 out. Marquez has thrown 25 pitches so far. It seems like he is getting in trouble.

Tauchamn hits a line drive to Left Field during his first at bat under the Giants uniform. Bases Loaded.

Casali is up next. The crowd starts chanting again. 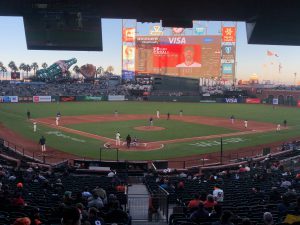 Alex Wood is up next.

Wood tries bunting on the first two pitches but fails miserably. He strikes out in the end. Two outs.

39 pitches for Marquez so far.

La Estella is up next, bases are loaded. Two outs.

Marquez is in trouble.

Longoria is up next. Men on 1st and 2nd.Longoria hits a line drive to Center Field. Hampson gets under it. 3 outs but the damage has been done.

Josh Fuentes is up next versus a very effective so far, Alex Wood. Fuentes strikes out. One out.

Pitcher, German Marques is up next and of course he strikes out in three pitches.

GIANTS Dickerson grounds to second base in the first pitch. McMahon gets it easily and throws to first. One out. Brandon Crawford is next while the Magic Hour is setting in at Oracle Park. Crawford strikes out. One out.Ruf is up next. Two outs.Ruf strikes out.  Three outs.

Garret Hampson is up next…Hampson grounds to Wood who reacts promptly. One out. 38 pitches for Wood so far…McMahon grounds to second. La Stella dives and makes the catch and rapidly throws to first. Two outs. Story is up next. He hits a line drive to Center Field. Tauchman speeds up and makes the catch. Not to curse it, but Woods is throwing a perfect game. Shhh! I didn’t mention that. GIANTS: #29 Mike Tauchman is up next.Tauchman hits a grounder/bunt to third. Fuentes gets it and makes the throw but Cron drops it. Safe! Casali is up next. Casali hits a pop up shallow RF. Blackmon makes the run and catches it. One outs. 74 pitches for Marquez.Wood bunts succesfully. Tauchman advances to second. Two outs. La Stella gets on base. Men on 1st and 2nd now.Belt is at the batter’s box now.Belt strikes out looking.

Cron pops up to Center. Tauchman gets under it. One out.

#19. Charlie Blackmon is up next. 50 pitches for Wood so far. Blackmon walks. The perfect game is gone.

Daza is up next. He hits .304 up until this at bat. Daza chases and strikes out. Two outs. Fuentes is next. Man on first.

Fuentes strikes out. The no-hitter remains. Wood looking great. Giants 4 Rockies 0. Bottom of the 5th. Longoria, Dickerson and Crawford. Up next… 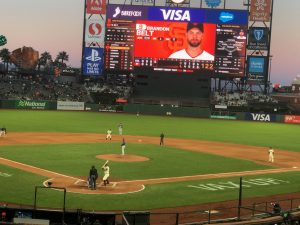 Bowden is pitching for Colorado now.

Longoria hits a hard gorunder to third base which strikes the bag. He’s on first base now! No outs.

Dickerson in the batter’s box now. Dickerson pops to third. Fuentes does a little dance around his bag, gets under the ball and catches it. One out. Crawford is next.

Ruf is up next. Man on first. Ruf walks.

Tauchman who is 2 for 2 today is up next.

Tauchman strikes out. Inning is over. Giants 4 Rockies 0

Diaz, Bowden and Hampson are up next. It’s obvious Diaz is struggling in the plate. He’s hitting a mere .088 and he strikes out.

Alan Trejo is pinch hitting for the Rockies now. That’s it for Bowden.

Hampson in the box now. He hits a line drive to RF. Ruf runs abd dives to make the catch but he drops it. It’s a hit. The no hitter is gone.

McMahon is up next. Man on second. Two outs.

McMahon hit a deep line drive to center field. Tauchman runs and gets it.

Bottom of the 6th. Giants 4 Rockies 0

Casali hits a really slow grounder to third but still out at first.

Pitcher Alex Wood is next. Wood’s batting average is .000. J Sheffield on the mound for the Rockies.

Wood walks. La Stella is next…

La Stella gets a single to LF. Wood advances to 2B. Men on 1st and 2nd.

Wood tries stealing 3B but forgot how to slide and gets caught at third.

And Belt… strikes out… again… 3 outs.

Story, Cron and Blackmon are next…

wood at 88 pitches now… he will be out of this game soon very likely.

CJ Cron pops to shallow center field. The ball drops. That’s the second hit allowed by Wood of the night.

There’s a conference in the miynd but Wood stays in the game.

Blackmon is next. Men on first and second with no outs. The most dangerous moment for Wood so far.

Blackmon grounds to the pitcher but the ball hopes over Wood. Crawford gets it and throws to home. Not in time. Safe! Bases loaded. No outs.

Single to RF. One man scores.

Rockies 1 Giants 4 and that’s all for Wood

#75 Camilo Doval to the mound. Bases are loaded. No outs.97MPH Fastball by Doval. 4-6-3. On run scores. Giants 4 Rockies 2. Two Outs. Diaz walks. Men on 1st and 3rd.Raimel Tapia is up. The inning is finally over. 2 runs score but the Giants are still ahead 4 to 2. Bottom of the 7th. Longoria, Dickerson and Crawford… up next…

Longoria walks. Dickerson is up next.

Dickerson is 1 for 3 tonight.

Dickerosn hits a hard grounder to short. Story dives but can’t get it. It’s a single!

Runner advances. Men on 1st and 2nd with no outs.

Wild pitch. Both runners advance. Crawfor is having a poor night tonight. 0 for 3. He walks.

The bases are loaded!

Darin Ruf is up. He’s 0 for 1 tonight. Chants coming from the bleachers section. This games starts to feel “normal” again.

Ruf strikes out. One out.

Tauchamn, who is having a great night tonight is up. Bases loaded.

Tauchman hits a grounder to the pitcher. The pitcher tries to get it with his bare hand but the ball bounces off of it towards short stop. Everyone advances. One run scores. Giants 5 Rockies 2

Casali is up next. Casali walks. Giants 6 Rockies 2.

Tyler Kinley comes to the mound for the Rockies.

Movement in both bullpens.

Wilmer  Flores hits a single to deep right field but gets caught on second. Terrible base running by the Giants. 7-2 Giants.

La Stella is up. 2 outs. La Stella strikes out and the side is retired.

#45 Skye Bolt is pitching for the Giants now.

Garret Hampson is up now. He smacks one to deep LF but the SF Bay’s wind kills it mid air. Dickerson gets under it. One out.

McMahon hits a grounder to RF. Its a single.

Story hits a pop up to RF. Ruf gets under it. Two outs.

Cron is up. McMahon is still on first. Cron walks. Men on first and second.

Blackmon hits a pop up to LF and the inning is over.

Belt, Longoria and Slater for the Giants.

Longoria pops up to RF. One out. Belt stays on third.

Fuentes strikes out. One Out.

Diaz hits a a double to Left-Center. On run scores. Giants 7 Rockies 3

Hilliard pinch hits for the Rockies. He strikes out. Two outs.

Hampson is up now.

Hampson pops up to RF and the game is over.

Donate now and help keep independent radio on the air!