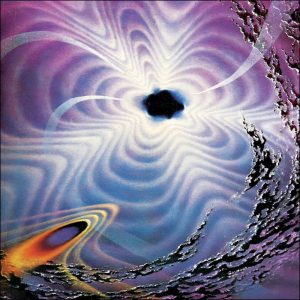 Modern society seems to have an infatuation with “The Void.” Meaninglessness can penetrate our cognitions with terrifying ease. There’s a void in the center of Astral Tomb‘s album cover for new LP Soulgazer. It features a 90s-Microsoft-esque nebula of shimmering purple that seems to be trying to escape an all-consuming black hole. Upon first listen though, the sounds encased in these five tracks suggest something opposite.

From Astral Tomb’s perspective, we’re already inside the black hole. And the void is magnificent. The band carries the torch of Old School Death Metal fiends like Timeghoul and Demigod, and adds the cosmic space-outs you hear from their peers Blood Incantation and Cryptic Shift. And Astral Tomb isn’t afraid to add some typically non-Metal sounds like modulating synth and drones (this can be heard to greatest effect on “Traversing the Wandering Star”). And of course, there is no shortage of spastic guitar, bass, and drum freakouts.

The void may be here. But that doesn’t mean that it’s devoid of beautiful experimentation.